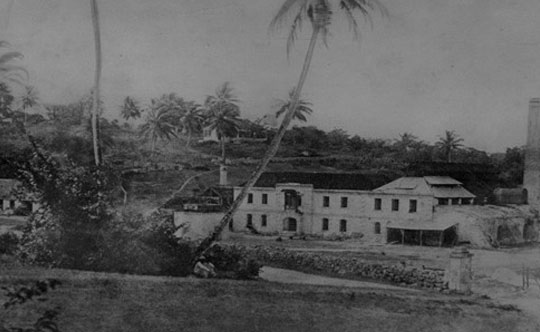 By Ivor Conolley, PhD
A fascinating article describing the outcome of recent archaeological excavations of a site in Jamaica occupied by successive generations of the Tainos.

So much is lost to posterity, so much forgotten individually and collectively; archival documents succumb to the ravages of time; cave drawings and engravings weather and wear through the centuries; structures of timber disintegrate to fibrous dust; monumental buildings of stone lie in rubble or held in place by trees, roots and twisting vines. What little has survived these importunities and what, even less, are observed through accident, or a crack in the time warp, by a grandparent who loved the past and loved to share it, are to be treasured and memorialised.

It was Paul Jarrett’s great, great, grandfather who, in 2004, shared the story of the fighting Arawaks, now called the Taínos. It was this memory that remained intact by Paul’s people who for generations stayed on the mountain, who for centuries observed the activities of people on the other mountain. One hill was called Spaniard Hill, the other Johnson Hill. People who lived on these two mountains were different culturally in this early period, but they were people who perhaps worked on neighbouring sugar estates: Kent and Orange Valley.

Kent had its ‘Spaniard Hill’ and Orange Valley had anecdotally its ‘orange orchard planted by the Spanish’ thus the name Orange Valley (personal conversation Henderson: 2013). Both harked back to pre-1655, to the period before the English took Jamaica from the Spanish. This hill was possibly called Spaniard Hill by the British because speakers of Spanish, Taínos (who had previously been enslaved by the Spanish for about 150 years – much time to learn the language of the colonisers) occupied the place. Perhaps the family of Johnson owned Johnson Hill. Whatever the reasons, the young man (Paul Jarrett) who said in 2004 that the Arawaks on the neighbouring mountain used to drink, get drunk and fight on the mountain across from his farm on Johnson Hill, was, at least, partially correct. There were no Arawaks living on Spaniard Hill during Paul’s lifetime. The Arawaks (Taínos) may or may not have drank, got drunk and fought as he said, but they did live there. Archaeological excavations in 2014, 2015, 2016, 2017, 2018, 2019 and 2020, totalling approximately 15 weeks, proved their presence and their interaction with the Spanish and British.

A radiocarbon date would indicate how long they lived on the site, but in the absence of this, the depth of middens would indicate occupancy duration. These middens were deep indicating that the site was occupied continuously for a long period. Also helpful in determining occupancy duration was the presence of pottery, of which different styles were found on the site. There are three identifiable timelines in Taíno pottery namely, the White Marl pottery style which marks the advent of the Taínos in Jamaica in 850 AD, the Montego Bay pottery style which emerged circa 1100 AD and St. Ann style circa 1510 (contact period). No St. Ann style was found on the site, although Montego Bay and White Marl were both uncovered. Montego Bay was obtained at the lowest horizon suggesting that occupancy of the site commenced post-1100 AD but before contact with the Europeans in 1494.

The narrative below is prepared from an analysis of artefacts actually obtained from this site and from features revealed by excavations.

The Cacique of Spaniard Hill lived on this northern 336-foot hilltop five miles from the sea but in full view of it. He felt the up-rushing wind from the valley below, the sweeping rain from the north east and the blazing sun warming his nearly naked body in the day and sunrises and sunsets inspiring his soul at dawn and dusk. He drank from surface rivers fed by underground aquifers on this fertile plateau where he planted and reaped his crops. He was the political and spiritual leader of this Taíno village. His residence, the bohio, was located in the centre of this 3-hectare site on the brow of the hill. He could see the Caribbean Sea from this vantage point; he could see vessels paddling their way to fish, trade or war. 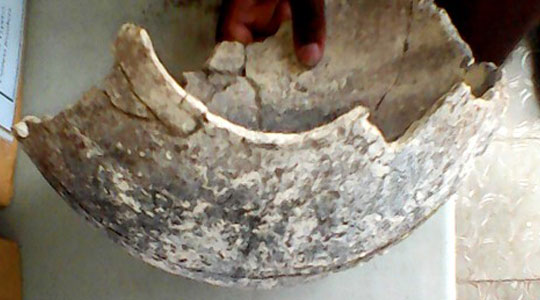 Just outside his residence was his cooking area. He had wooden posts on which to hang his large round-based cooking pot which would contain a stew or pepperpot soup boiling and simmering and available on demand. He ate seafood of all types. Some were fished from the deep with hook and line; some were baited in traps closer inland. Clams, conch, and wilks were collected from the reefs, mangrove banks and shoreline sand. Coney caught in the wild or kept in coops were stewed or roasted. Cassava, farmed on the site was grown, the tubers reaped and grated to make flour for cassava bread. The bread was baked on a cassava buren or griddle. Potable water was kept on the site in large water jars. The shell horn, a musical instrument was manufactured by creating an aperture at the apex of a conch shell and was blown for rituals and entertainment. Also, an emblem of office, his ceremonial staff may have been placed in a receptacle or holder, a hollowed out stone. 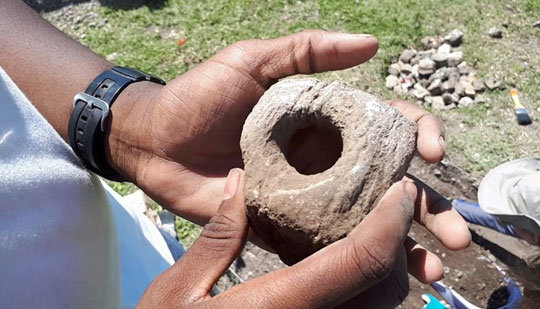 In his house, he had his spatula, inhalation tubes and shell spoons to conduct religious cleansing rituals. The spatula was used to induce vomiting to expel the disease or problem; the spoon used to ladle the cohoba powder; the inhalation tubes were used to draw in the hallucinogenic cohoba powder through the nostrils. This would induce visions and journeys into the spirit world where messages would be received. He also had carved stone figurines, representing gods, his Zemis, which helped him to control the forces of production and governance. One such figurine was made from limestone readily available from nearby hills. However, the other was carved in greenstone, a stone not present in Jamaica. This greenstone Zemi, or the stone from which it was fashioned might have been traded from as far away as Hispaniola.

Another item sculpted from local limestone was his stone tablet. It was shaped in a heraldic scroll style of the type appearing in European heraldry but with anthropomorphic and European facial images. He also possessed a British Pearlware game piece and appearing throughout the site were numerous British colonial artefacts such as blue transfer print pearlware manufactured during the period 1800 to 1900 intermingled with his own cultural material. He met the Spanish, and his descendants met the British. These meetings led to Taíno artefacts being mixed with European artefacts and their eventual disposal, and now their retrieval through archaeology. It was an inevitable conclusion; the two cultures had interacted.

It should not be surprising, however, that the Taínos would have continued in communities, however small into the 1800s.These descendants interacted with the British, possibly working for them on the sugar plantation which literally grew up around them, that is, on the very location on which was their village. They had lived on this site for generations. They met the Spanish who said it was their land. Now they met the English who said it was theirs. This Englishman wanted his people to work for him. The Englishman said the English Crown, had given him this land that the Taínos occupied. The Cacique reflected that when the Spanish controlled the land their cows and pigs were left to range freely on the land and had destroyed his crops, and their unfamiliar diseases had affected his people. They had to work as slaves for the Spanish for they stayed on this mountain and they did not flee their community to go further inland into the interior mountains. They managed to survive then. Now, they would work for the English to survive. They were not alone. Enslaved Africans and enslaved creoles also worked on the estate and they were also permitted to have land on the estates to build their homes and plant their crops.

Through the centuries, through the period of the Spanish and the English, the tradition continued with one cacique transferring power to the other. They still lived on the same site. They adapted to and worked with the Spanish likely on the orange orchards and the British on the Kent sugar estate and likely tasted their manufactured products, notably rum with which they “drink, get drunk and fight.” They work with the British and use their ceramics. The cacique continued his rituals but added to his collection of symbols an English ceramic gaming piece, and other British ceramics.

The site was eventually abandoned. Was it the British Crown, enforcing a law (pre-1838) that prohibited estates to enslave ‘indians’, meaning the indigenous people, that required the Taíno community to take their freedom, leave that location and find a different home? Was it post-1838, on the abolition of slavery, a period of transformation which inspired them to move away and further abandon an already tenuous way of life? Perhaps a younger generation exposed to the city life and aspiring to it? To date, the archaeological evidence has not revealed an answer to these questions, but we continue to dig.