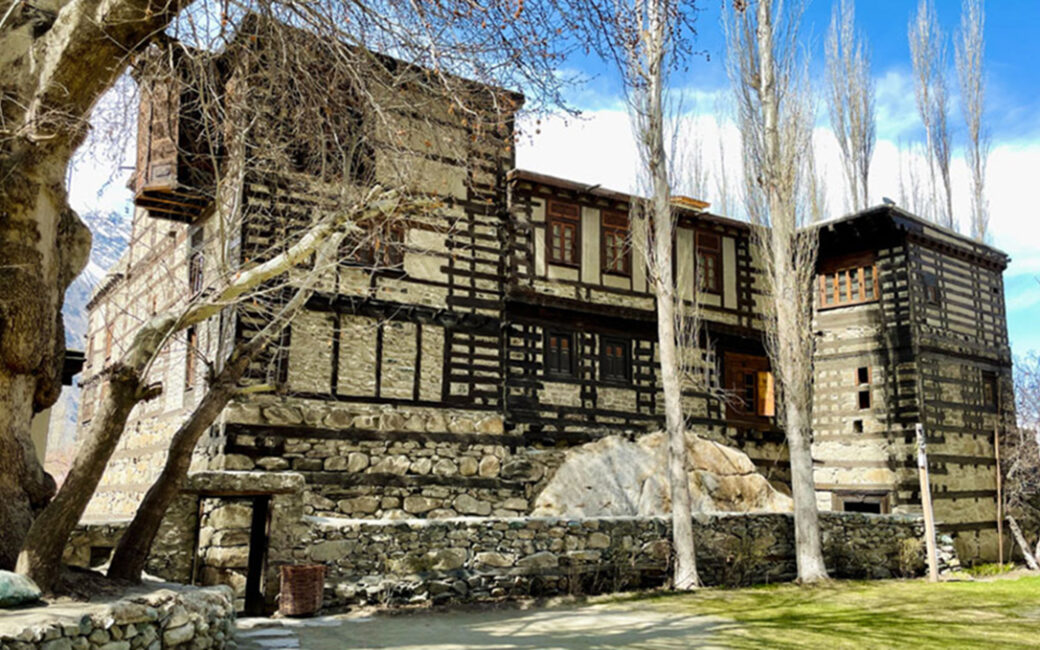 Heritage restored – at the heart of sustainable tourism and economic revival- the example of the Serena Shigar Fort located in the Northern Areas of Pakistan.

The Gilgit-Baltistan region, separated and isolated through chasms formed by the Himalayas and Karakoram mountain ranges, possesses a rich cultural landscape including crafts, festivals, cuisines, art and musical heritage as well as imposing palaces and forts demonstrating masterful and intricate woodwork and design.

The appreciation of these historic cultural assets, is beginning to take shape. Formerly, places were once left as ruins when they no longer served their purpose, today, they are beginning to be seen as cultural artefacts, and therefore assets.

Once isolated, the region was brought into contact with the modern world with the development of the Karakoram Highway in 1984 linking Pakistan to China. Forever the double-edged sword, the inflow of tourists, brought threats of erosion of culture and identity through the forces of globalization and needed to be addressed.

Respected for its appreciation and recognition of cultural assets and their significance, and ability to restore, repurpose, build and manage much needed tourism products, The Aga Khan Fund for Economic Development (AKFED), took on the challenge of the Shigar Fort and region. This is one of a series of social, cultural and economic initiatives undertaken by AKFED in the Northern Areas of Pakistan, and was typically larger than the fort itself, encompassing the rehabilitation of nearby settlements, mosques and the upgrading of water and sanitation services.

Located at a height of 2,250 meters, in the Skardu Valley of Gilgit, Baltistan, the 400-year-old (early 17th century) Shigar Fort standing on the bank of Shigar stream is built upon a massive rock and was once the seat of the ruling dynasty of Shigar. The fort and three storey palace within the fort was constructed by Kashmiri workmen, carpenters, goldsmiths and masons, hired by Raja Hasan Khan, 20th Raja of the Amacha dynasty, who named it Fong Khar – Palace on the Rock.

The Fort’s and Palace’s method of construction, with its defensive motte base of cyclopean masonry, weighted wooden beams, stone and cribbage-and-cator system of construction, use of large beams both as structure and exquisitely carved decoration, fine rubble masonry, lime mortar and other traditional building techniques was influenced during its evolution by Baltistani, Kashmiri, Tibetan, and Mughal forms. The buildings, to a large extent in their use as a hotel have retained elements which describe the social and cultural every-day use of their past in such architectural details as the sleeping niches. (Masood Khan, 2007)

By the time the conservation and restoration team of the Shigar Fort / Palace, – the Aga Khan Trust for Culture- began, the building was near a ruin with bulging walls and missing roofs (Masood Khan, 2007). It was an ideal project to revive traditional skills, training and job creation and

improving the local economy in the process. Thus, supporting the belief that culture “can be the catalyst for social and economic development” (his Highness the Aga Khan cited in Pamir Times.

The Aga Khan Fund for Economic Development, through its Tourism Promotion Services operating under the Serena Hotels brand has transformed the fort and palace into an elegant hotel, restored in context and still retaining original elements from its historic beginnings. In its creation, local crafts people such as weavers were supported, bringing hand woven textiles from neighbouring villages for decoration and use by the guests. Its gardens too reflect the history of the region, surrounding the fort with cherry, apricot and apple orchards and includes a traditional Amacha Garden.

To read more about the historic structure, the extensive conservation work and the holistic approach to the community, local economy and surrounding area download Masood Khan’s chapter noted below.

The conservation – Aga Khan Fund for Culture partnered with the Norwegian Government and funding from the governments of Germany, Greece, Japan, Pakistan, Spain and Switzerland as well as American Express, read more.