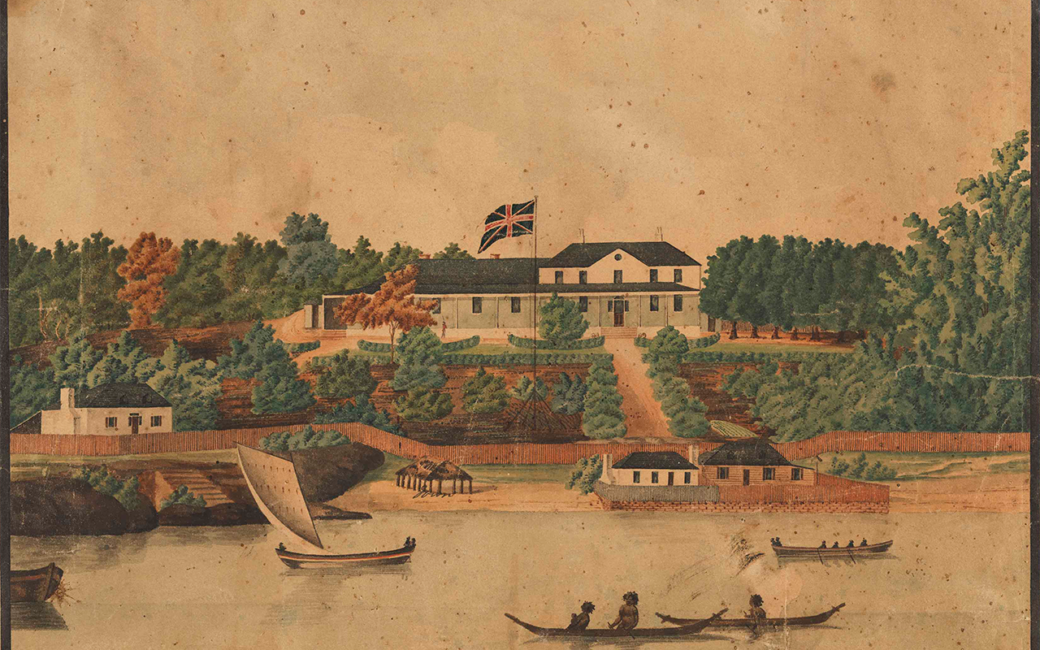 The first recorded watercolour in Australia was made by surgeon Arthur Bowes Smyth on 11th February 1788. He told his journal that he had ‘etch’d the likeness of the [grass] Tree wh. produces this Gum, wt. my pen, wh. I have subjoined’d, & is no very bad resemblance of it.’ This basic watercolour is now in the collections of the State Library.

The impulse to document, collect and classify was strong despite the First Fleet’s uncertain circumstances. Watercolours were an integral part of this dialogue. In April 1790 Governor Phillip told Sir Joseph Banks that he had commissioned a series of botanical illustrations; by September 1790 Phillip’s spearing at Many Cove was crudely but carefully illustrated by an unknown artist.

Early colonial artists focused on three main areas: natural history illustration, landscapes and portraits of Aboriginal people. It was not aesthetically sophisticated art – conventions like the picturesque were rarely employed – rather it was relentlessly topographical and documentary. But despite their often amateur patina (few professional artists came to NSW unless as convicts), these images were nonetheless carefully scrutinised for the information they contained. Elizabeth Macarthur in Sydney, for instance, had seen watercolours of Norfolk Island before March 1791: ‘The Island has a most charming picturesque appearance from the drawings I have seen, and what I have heard corresponds with it . . .’ Her comment suggests that drawings were carefully scrutinised for their information, and that they were trusted, with some qualification, as evidence.

And evidence was particularly critically scrutinised in images of the new colony. Australia wore the weight of its convict heritage heavily. As David Collins wrote in 1798, ‘From the disposition to crimes and the incorrigible characters of the major part of the colonists… the word “Botany Bay” became a term of reproach that was indiscriminately cast on everyone who resided in New South Wales.’ The built environment, then, was in itself primary evidence of the colony’s success. It is no coincidence that Government House, nestled in the foreshores of Sydney Cove, was so frequently depicted by local artists. As the very centre of British power in the colony, its presence offered reassurance that the colony was in fact well controlled and governed. Churches, warehouses, substantial private residences, and other elements of public infrastructure all symbolised colonial success and stability. 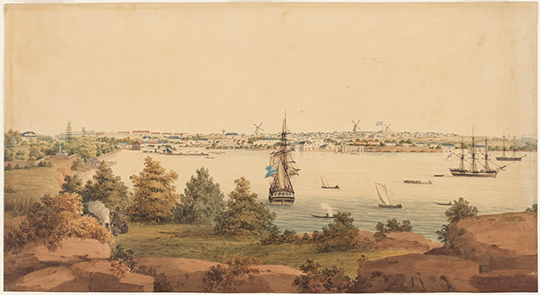 After 1800, when the success of the colony was assured after its uncertain beginnings, artworks focused very much on the literal documentation of the various European settlements. In many ways these drawings were investment prospectuses. When a Sydney merchant proposed to commission a panorama of Sydney in London in 1820, he noted that ‘it would create much public interest and ultimately be of service to the Colony.’ Importantly he stipulated that ‘the view of the Town must be entered into with a minute and Systematic detail.’ Most town views from this period follow this formula. They centre on Government House, and carefully delineate the spread of buildings which surround it. Not surprisingly the one detail most frequently omitted was the very raison d’être of the colony: its convicts.

The strong topographical focus of much colonial art making persisted well into the 19th century, a legacy of the enduring anxiety about the colony’s convict origins. Even after the mass influx of free settlers began arriving in all the Australian colonies from the 1830s, significantly changing the dynamic of the market (free settlers, for instance, commissioned portraits as well as views), landscape images remained central to local art practice.

Artists like Conrad Martens could easily slip Australian topography into a veneer of romantic picturesqueness which confirmed both the colony’s intrinsic value and its place within the British Empire. As one writer noted when visitors arrived in Sydney, they found a ‘miniature copy of the English metropolis… they looked for slavery and chains, and behold freedom and luxury! they looked for a prison, and behold a palace!’

Australian watercolours are never just interesting relics of the past: rather they are critical documents of this country’s emergence from penal settlement to independent colony.