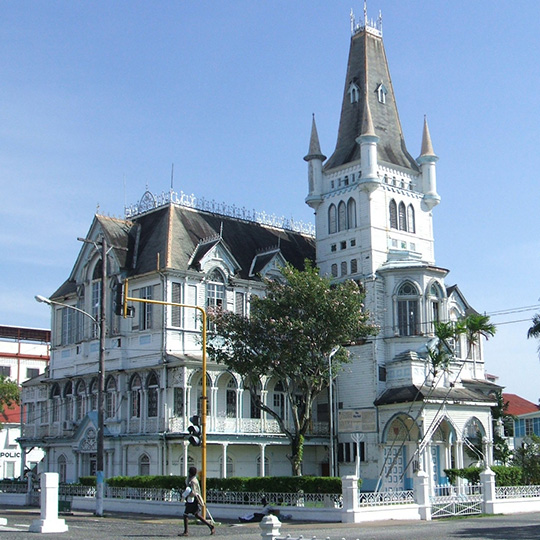 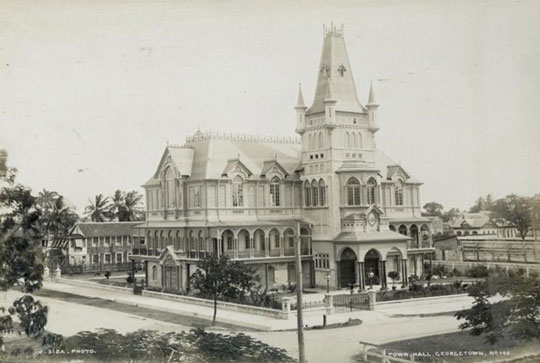 By Francis Maude, Donald Insall Architects
Georgetown was raised to city status as the capital of the then colony of British Guiana by Royal Warrant on 24th August 1842.

Nevertheless, it was only some forty years later, after patience with various makeshift expedients had finally worn out, that the offer of a plot of land in the centre of the city prompted a public competition for the design of a City Hall. 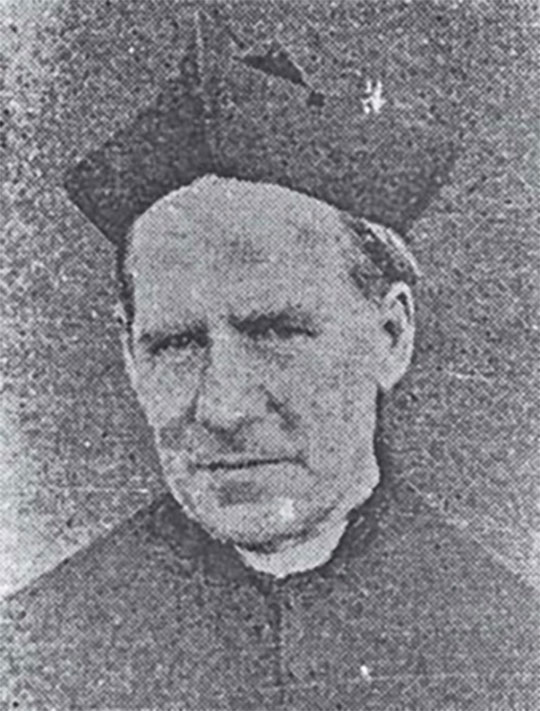 The winner was the Very Revd. Ignatius Scoles, SJ, ARIBA, 1834-1896, who had trained as an architect in England before commencing training as a Jesuit priest in 1860. He maintained both careers even after he was sent to Georgetown in 1879-80, where he remained for the rest of his life.

The City Hall was constructed between 1887 and 1889 in a notably whole-hearted Gothic style, as was then in widespread use in Europe and particularly in Britain. There had been a number of new town halls (such as Chester, known to Scoles) built to a revived Gothic design, which echoed the magnificence of the original medieval structures, particularly those of the cities of the Hanseatic League.

The accommodation within the Hall provided a Council Chamber at first floor level, supported by a Mayor’s Parlour adjacent. Both these rooms could be reached from the front of the building via a porte-cochère and main entrance from the High Street, rising up a splendid staircase. The Council Chamber still contains a horseshoe shaped table for the Mayor and Councillors, and, to one side, a separate area for residents and other interested parties to listen to the debates of the Council. 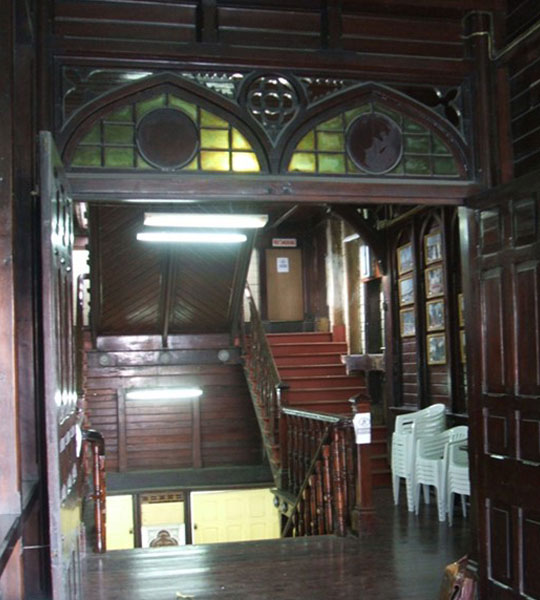 The staircase rises another floor to the Concert Hall, which occupied the whole of the second floor. It contained a stage suitable for presentations as well as concerts and the musical instruments could be supported by an organ which was integrated into the design of the room. The acoustics were always considered particularly good, and this was ascribed to the double vaulted “hammerbeam” ceiling. A seated audience of some three hundred and fifty could be accommodated. If

the room were fitted out for receptions, then almost two hundred people could be entertained at tables.

When first built, the City Hall’s ground floor contained the City Fire Brigade; the three large openings to the rear (east) side of the building were to contain the horse-drawn engines and mobile ladders. This accounts for the provision of louvres to most of the openings at ground floor level. Only the associated office accommodation would have had glazed windows. By the early 20th century, a new fire station had been built on an adjacent plot and the space was converted for use by the accounts department. 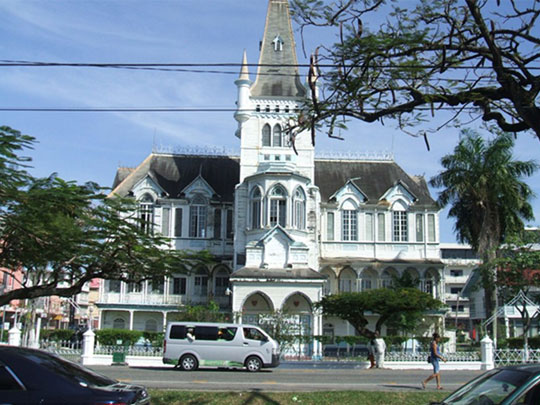 The City Hall was built in timber over a cast concrete ground floor, which itself rested upon a mass concrete raft. The upper floors enjoyed cast iron embellishments, notably elaborate balconies to the east and west elevations. This type of construction addressed the principal factors in local construction procurement: the location where the Demerara River meets the sea with major port facilities nearby; the swampy nature of the ground and the easy availability of constructional timber (greenheart and purpleheart) from the nearby rainforests. The global nature of the supply chain for the materials used in the construction is worth noting: cast iron was provided by Stevens of London; roofing slates came from the Penrhyn quarries in north Wales; pitch pine for the joinery and floorboards was imported from Canada or the northern United States; glass and brassware was brought in from England.

The City Hall was completed and opened on 1st July 1889. A stone panel commemorating this event remains in position in the main entrance to the City Hall. This lists the names of the Mayor, Clerk and Councillors in full detail, squeezes in a reference to the architect and contractor, and fails to name those who laboured to build the City Hall at all, which is a pity. The high quality craftsmanship, undertaken largely by locally trained builders, is notable. The building as it appeared soon after completion is shown below. 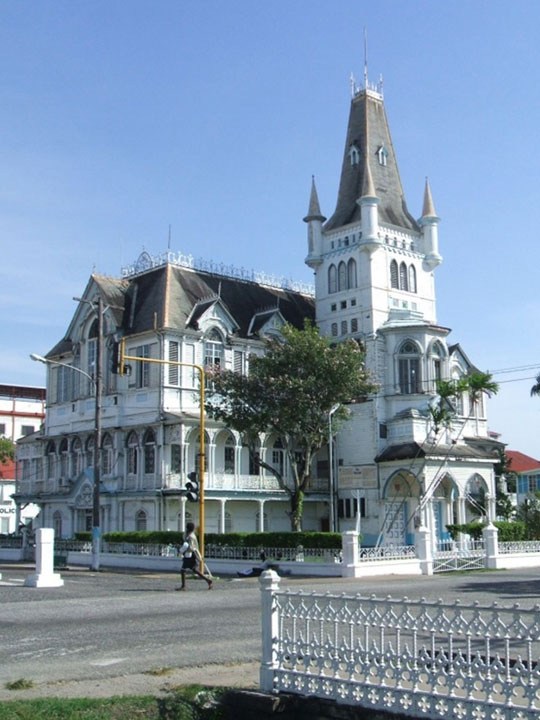 The City Hall occupies a central role in the life of the city although it is partially superseded by a new National Hall. The Concert Hall is remembered as the venue for importance functions such as the National Music Festivals, Philharmonic Society concerts, religious meetings, public lectures and political meetings, such as those held in July 1945 by Janet Jagan, which led to the foundation of the Women’s Political and Economic Organisation. The City Hall remains the focus for civic action to this day, and it remains in use as the Council Chamber, Town Clerk’s office and Treasury. 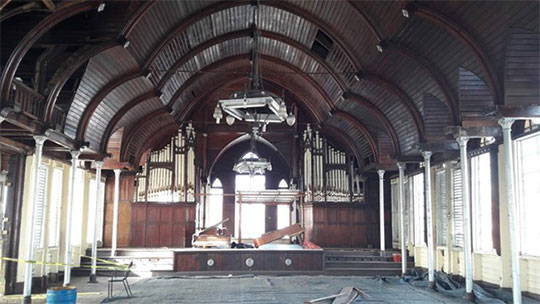 The top floor Concert Hall is now sadly unused and water penetration through the roof and windows has encouraged termite infestation. Nevertheless, the structure as a whole remains sound, and fully detailed proposals have been drawn up for its restoration, after an initial Conservation Management Plan (sponsored by the European Union) had reviewed its feasibility.